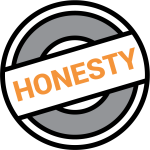 The normalization of dishonesty and deception threatens our common life. Lying has become an accepted political strategy and an applause line at public events. Whether done by Democrats or Republicans, it is just plain wrong!

Dishonesty destroys trust, rips apart the social fabric, and infects society with the deadly diseases of cynicism, corruption,  fear, and animosity.  Like an open infectious wound, lying contaminates the environment and threatens the health of others.

Honesty is an indispensable quality of character, and character does matter! Albert Einstein stated it succinctly: “Whoever is careless with the truth in small matters cannot be trusted with important matters.”

We have a right to demand that our leaders tell the truth! Lying for political gain is dangerously corrosive to more than politics. It threatens the survival of civil society and diminishes our basic humanity.

Restoring truthfulness and integrity to our life together begins within our own hearts and relationships.

My prayer today is that God will deliver me from my own temptation to put personal gain above honesty and free me from complicity with the normalization of dishonesty.

My grandfather, Dave Walker, was one of my heroes. He died in 1961 at the age of 67. He was a simple man who could neither read nor write; yet, he was perhaps the wisest, kindest, and most honorable person I have known.

The memory of a childhood incident resurfaced recently. I was about nine years old.

Granddaddy asked me to walk to the store with him. It was a mile walk up the country road in eastern Tennessee.

He bought me a candy bar along with his purchase of a bag of flour. We left for our trek back home. As the house came into site, Granddad reached into the pocket of his bibbed overalls to count his money.

“We have to walk back to the store,” he said. “He gave me an extra nickel and I’ve got to return it.”

“But it’s just five cents,” I protested. “He’ll never even know he gave you too much.”

“But I’ll know,” he responded in his typical gentle voice. He added, “Always be honest. You’re only as good as your word.”

Granddaddy could have used that extra nickel, probably more than the owner of the grocery store. He was “dirt poor,” working at odd jobs, plowing gardens, growing his own food on a rocky little farm.

When he died unexpectedly of a stroke, that rural community mourned his loss. People gathered in masses for his funeral at the McKinley Methodist Church. These were among the most frequently heard compliments:

I’ve thought a lot about my grandfather during the current climate of runaway dishonesty: Charges of “fake news” by those swimming in untruths and distortions. Social media’s dissemination of false narratives for partisan political or selfish personal gain.

Dishonesty in high and low places has reached epidemic proportion and is increasingly accepted as the norm in political and social discourse. Lying has become a sanctioned political strategy. Character has been disjoined from policy as though winning surpasses personal and corporate integrity.

Fred Craddock shared an experience in the buffet line at an airport food outlet. He watched a man in front of him hide a pad of butter under his plate.

The butter only cost five cents!  A harmless or inconsequential dishonest act! But Dr. Craddock commented that he kept his eyes on his luggage when that man showed up at the same boarding gate. All trust was gone!

Dishonesty infects the soul and poisons every aspect of life. It destroys trust, taints kindness, fractures relationships, undermines community, and subverts the common good. Lies are like termites eating away the foundation, or malignant cancer cells destroying vital organs.

Character matters mightily! Granddaddy Walker was right, “Always be honest! You’re only as good as your word!”